Usually in the second week of the semester students will go out with their GLAMs (GLAM description) and buddy group to get to know one another and make new friends. My buddy meeting was one of the best nights I’ve had in Korea so far. A group of approximately thirty people gathered at BHC, a fried-chicken restaurant in front of the CAU campus. Although the restaurant looked small on the outside, it was actually quite spacious on the inside. Four tables had been reserved for our group. We sat ourselves down and mingled away. 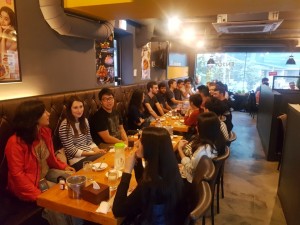 From front to back – Sober table to drunk tables.

Let’s just say the drinks arrived before the chicken, so it didn’t take long before people started to get tipsy. But don’t fret! I was part of the sober table, where all the non-drinkers simultaneously ended up sitting together, so I can relay the events of the night quite clearly. The chicken arrived about fifteen minutes in, along with refills of beer and soju. For the three vegetarians in the group, including me, the GLAMS ordered french fries in cheese sauce and some vegetarian kimbap from a nearby shop. (For all my vegetarian friends, don’t fret, your GLAMS will take care of you!) Each individual paid 15,000 won for the meal and drinks.

The gigantic jugs that the beer was served in, and of course, soju on the side.

As the night progressed, everyone got really comfortable with each other. My table consisted of people from Singapore, Germany, Mexico, France, America, Canada (me), and South Korea (my GLAM). All the tables were quite chatty, and we never felt awkward or ran out of things to say. Over at the other tables, the drinkers were having fun playing drinking games. We spent about three hours at the restaurant (though it felt much shorter) eating and drinking the night away.

The sober table had coke with their chicken.

Once everyone was full (and some people, drunk), we decided to move on to the next place. Half the group decided to retreat back to the dormitory. The other half of us went to a Noraebang (karaoke room) thirty seconds away from the chicken place. It was my first time at karaoke, ever, so I was extremely excited. We made our way into the place and could hear some off-tune singing coming out of the occupied rooms. It was quite hilarious, but at the same time it gave me some confidence. 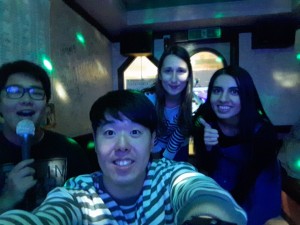 My GLAM, I, and two other buddies had a karaoke room to ourselves.

Since there were about sixteen of us, it only cost each of us 1,500 won for an hour with two karaoke rooms. This particular Noraebang offered not only Korean, English and Japanese songs, but songs in other languages as well. We sang everything from Coldplay, to Whitney Houston, to BTS, to Twice. Of course, everyone in my room began with “I can’t sing”, then ended up singing like Beyonce. Then there was me. Let’s just say when I say “I can’t sing”, I mean it. If you don’t know how to read Hangul, beware, the Korean songs are not romanized! I thought I had “BTS – Not Today” memorized, but I quickly discovered that was not the case. Also, beware, the remote control buttons are in Korean as well. Luckily our GLAM was there to help both groups with our song selections.

At the end of the night before we headed back to our dorms.

An hour flew by fast and we made our way out of the Noraebang. We ended the night with a group selfie, then made our way back to the dorms. All in all, the buddy meeting was a great experience. I really recommend all international students to take part when they are given the opportunity. It will definitely become a night to remember!