The Spring 2017 semester has been an exciting one to say the least, jam packed with many opportunities that both CAU and international students have been able to take part in. Not only have there been on-going annual events for students to show their school spirit, extra curricular pride and unwind – through events like the LUCAUS festival, but this year in celebration of 100 years of success, CAU incorporated a vision of the future, inspiring the passions and bright minds of students by hosting environmental global leader, former US Vice President Al Gore. 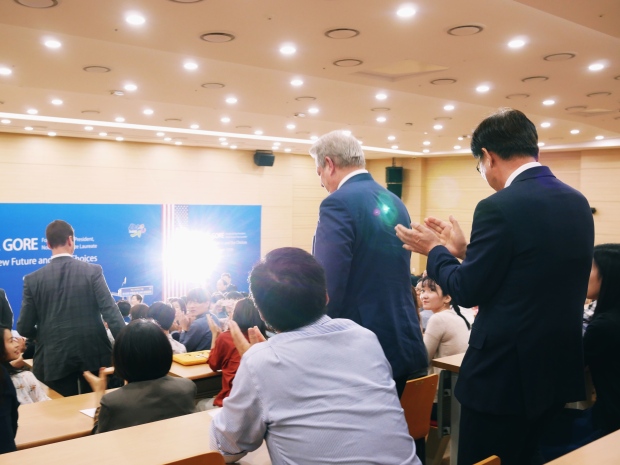 As former US Vice President, Nobel Peace Prize Laureate, and co-founder in Generation Investment Management, Al Gore showcased his dedication, passion and knowledge not only in his strive to address the global climate crisis, but also in the various fields tied to the on-going environmental campaign and battle with ensuring international level commitment to change. Al Gore began his presentation by introducing three questions that he believes, if answered, will determine our commitment to and the future of the global climate crisis.

Addressing the first question, Al Gore spoke the harsh realities of the rapidly depleting state that our environment is in. Additionally, how without major shifts in our behaviors, we will see both harmful and permanent effects on our world that not only will greatly affect the generations to come, but is an immediate issue to be addressed now. His speech was highly effective, as he was able to explain in laymen terms the emerging evidence of climate change with examples of the increasing global temperature, depletion of glacial ice sheets and rising ocean temperature. Connecting with the audience, Al Gore shared anecdotes of his travel experiences where he was able to view firsthand these harmful symptoms of our deteriorating world. Although debuting with a grim context describing the severe circumstances of the tough future we face, Al Gore was able to shift into a positive focus when addressing the latter two questions, bringing to light the positive changes that are taking place both on the micro and macro level of society. Al Gore spoke inspirational words of the future, and proposed that the youth take responsibility in leading the world to not only a cleaner future, but also one that is more unified.

Inspiring the minds of students across various fields of study, Al Gore accounts for the global crisis as a multidimensional issue that must be tackled at all angles, and through this explained that the resolution of this crisis initiates the “Sustainability Revolution”. Having time to address individual questions at the end of his talk, Al Gore encouraged the spread of climate change awareness by means of personal memoirs, introduced the role that artificial intelligence and copyright will play in the future of global sustainability and most importantly, how students and youth can earn their voice in enacting change on a rippling scale.

The importance of South Korea joining the fight in this moment is imminent, as in 2016, South Korea was ranked one of the world’s major CO2 emitters. Although South Korea is a ratified member of the 2016 Paris Agreement, its nationally determined targets represent ones that were made 10 years prior, and show a weakening of their climate plans. Overall, according to the Climate Action Tracker Organization, an independent scientific analysis team that track global emissions, South Korea has been ranked as “inadequate” in their role in making climate-conscious changes. South Korea, however, similar to every other nation, cannot evade from the symptoms of climate change, and these effects have begin to show through in flooding and typhoons and the worsening of already poor air quality. But… there is good news to come:

With many empowered students looking to join the environmental fight, regional specialization in technology, a recent change in presidential office, and most importantly, Chung Ang striving for greater educational status on a global scale, now is the opportunity to initiate lasting change. Amongst the most highly recognized schools, it would only be further beneficial for Chung Ang to take step forward into a leadership role and transition with an additional vision – one that incorporates a greater strive and contribution to their impact in environmental change.

Youth have fresh eyes and have not yet experienced certain life challenges that taint one’s moral clarity, and in the inspirational words of Al Gore,

“the future is the youth who want to change their lives to lead us”.